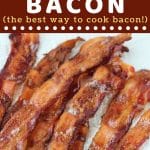 Baked Bacon is, hands down, the BEST way to cook bacon! Once you learn how to cook bacon in the oven, you’ll never go back to a frying pan again!

Would you like to cook bacon without having to stand over the pan flipping and rearranging the slices and without all the messy splatters of hot grease? How about super easy clean-up? Yes, you say? Then you need to be bakin’ your bacon!

Bacon is awesome at breakfast, delicious on a sandwich or burger, fabulous on a salad or baked potato, and it’s excellent wrapped around things like scallops, water chestnuts and dates. I’ve even seen it made into jam and ice cream!

As I was baking some bacon over the weekend, I was thinking that maybe some of you haven’t yet tried baked bacon, and I remembered how thrilled I was when I first discovered this method, and so here we are!

But all that changed when I started cooking my bacon in the oven!

Now I can cook a bunch of bacon all at once, it all cooks evenly, I don’t have to babysit it, and there are no splatters all over me and my stove top.

And if you’re thinking, “But doesn’t the bacon grease just splatter all over your oven?” Actually, no, it doesn’t! I don’t know why, but it just doesn’t, and the slices stay nice and flat instead of curling up.

And about that clean-up… Once the bacon grease has cooled, just carefully fold up the foil and throw it in the trash. If you cover your pan properly, there should be very little to no grease – most times, I don’t even have to wash the pan!

HERE’S A QUICK LOOK AT HOW TO MAKE BAKED BACON:

One of the reasons I love this method of cooking bacon is that you can cook a whole lot of bacon all at once and then freeze it. When you reheat it, it tastes just as good as when you cooked it!

When you’re ready to enjoy the bacon, just place it on a plate lined with a paper towel and microwave for several seconds until warm – or you can reheat it on a foil-lined sheet pan in a 325°F oven just until it is warmed through.

Now you can have bacon any time – even when you’re in a hurry!

This is a total game-changer, folks!

I hope you try this recipe for Baked Bacon and love it as much as I do. Thanks for visiting today! 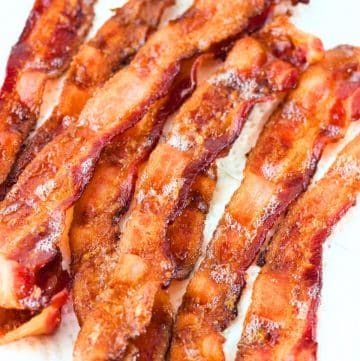