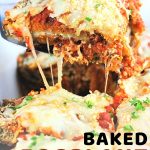 This easy Baked Eggplant Parmesan lightens up the classic Italian favorite by baking the eggplant instead of frying it! The result? Crispy eggplant slices layered with marinara sauce, mozzarella, and Parmesan cheese. It’s just as delicious as the original – but less calories!!

Eggplant Parmesan (or Parmigiana as you might see it on a menu) is one of my all-time favorite things to order when I go out for Italian…so of course I had to learn how to make it at home! The only thing that held me back from making it for the longest time is that the eggplant is usually fried {sigh}.

Now, I love fried food (who doesn’t?), but I definitely do not love the process of frying. It makes a splattery mess. I usually get burned. It ruins my shirts. It makes the house smell like oil for days. It makes my hair and clothes smell like oil. Then I have to figure out how to get rid of all that oil. The cleanup sucks. Yeah…NO.

So I decided to try baking the eggplant instead of frying it. I was skeptical. I never would have thought that you could get crispy eggplant by baking it, but you absolutely can! And it makes making eggplant parm so much easier! I’ve been making this recipe for a long time, and I make it often!

This Baked Eggplant Parmesan is similar to lasagna in that it’s layered with sauce and cheese and then baked in the oven. Y-U-M!

Eggplant has a relatively short shelf life, so you want to make sure you buy the freshest ones you can and use them sooner rather than later. Make sure the skin is smooth, shiny, and free of bruises and discoloration. The eggplant should feel heavy for its size. When you press your finger against it, it should be firm with a slight give (it should not be very soft).

HERE’S A QUICK LOOK AT HOW TO MAKE BAKED EGGPLANT PARMESAN:

I don’t like to use too much sauce when I put this together in the baking dish because I like to keep some of that crispiness you get from baking the eggplant. But I do like me some sauce, so I always heat up some extra sauce and put it on the plate when I serve it. So, so good!

If you want to make your own sauce, try my Quick & Easy Homemade Spaghetti Sauce recipe. It’s ready in 30 minutes! You can make it while the salted eggplant is sitting. Make a double batch so you have some extra sauce for serving.

I hope you try this recipe for Baked Eggplant Parmesan and love it as much as I do. Thanks for visiting today!