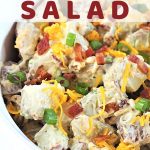 Tired of the same old potato salad? Change things up with this easy and delicious Cheesy Bacon Ranch Potato Salad that tastes like a loaded baked potato! It’s the perfect addition to your next barbecue or potluck!

No picnic or summer get-together seems complete without a side dish of potato salad. If you’re like me and get tired of the same old stuff over and over again, you’ve got to give this Cheesy Bacon Ranch Potato Salad a try. It will be a hit!

Set this out alongside your burgers, hot dogs, ribs, barbecue chicken, coleslaw, corn on the cob, or whatever else you’re serving, and get ready for oohs and aahs, mmms, and tons of recipe requests!

HERE’S A QUICK LOOK AT HOW TO MAKE CHEESY BACON RANCH POTATO SALAD:

I like to use red potatoes, and I leave the skin on because it gives the potato salad some nice color (plus, the skins have extra vitamins in them!). Yukon golds would also be good here. I prefer either of these waxier potatoes for potato salad because they hold their shape better and have thinner skin than russets (but you could certainly use russets too – skin on or off).

One of the secrets to a flavorful potato salad? Generously salt the water when you boil the potatoes. Potatoes need salt. Without it, they are bland and hardly have any flavor. In this recipe, I usually add a tablespoon of kosher salt or sea salt to the water. Use less if you are using regular iodized table salt, which tends to be sharper and saltier.

Now, if you are sensitive to salt or can’t have salt for health reasons, then obviously only add as much salt as you can tolerate or are allowed. But if you have no issues with salt, go ahead and salt the water. No need to overdo it. Just add enough so that the potatoes will taste good!

Another secret to fabulous potato salad? Don’t overcook your potatoes! Cook them just until they are fork-tender. They should be cooked through, but you don’t want them to be too soft, or else they will not hold their shape when you mix everything together, and you risk a mushy potato salad. We don’t want mashed potatoes here.

To avoid over-cooking, check your potatoes for doneness sooner rather than later as they are boiling, and keep checking them frequently. As soon as they are done, drain them and spread them out to cool.

Now, I know it can be tempting to take a shortcut and use bacon bits or some other form of pre-cooked bacon, but please use real bacon. There is definitely a difference in flavor! I am partial to thick-cut bacon myself, as it holds up nicer in bigger pieces.

For the cheese, I like to use a sharp cheddar or even an extra sharp cheddar for an extra flavor punch. Mild cheddar can sometimes get lost among the stronger flavors of the bacon and ranch. I also prefer to use yellow cheddar rather than white for the nice color it brings to the salad.

You can eat this as soon as you make it, but I think it benefits from sitting in the fridge for a bit so all the flavors can meld together and the potatoes can soak up some of that yummy ranch flavor. Totally up to you!

If you have leftovers, this potato salad holds up nicely for a few days in the fridge. We cooked out from the 4th of July straight through the weekend, and we ate it for another 4 days. It was still super delicious on day 4!

I hope you give this recipe for Cheesy Bacon Ranch Potato Salad a try and love it as much as I do! Thanks for visiting today!