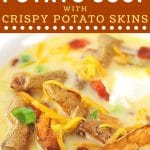 This easy Cheesy Potato Soup With Crispy Potato Skins is creamy, cheesy, rich and flavorful – and the baked crispy potato skins and all the extra fixin’s take it over the top!

Friends, this soup is 100% total comfort food! We could all use some of that right about now, no? Topped with bacon, cheese, sour cream, green onions, and crispy potato skins (the best part!), it tastes like a loaded baked potato!

Plus, it’s super easy to make and ready in less than an hour. How awesome is that? Pretty darn awesome!

What is definitely not awesome is that Old Man Winter is already knocking on my door. On Friday, we woke up to 3 inches of snow on the ground, and the past few days have been so windy and cold. Brrr and Grrr!

On days like that, there’s nothing better to warm you up than this cheesy potato soup. It makes you feel all toasty inside, and your belly will be full and completely satisfied.

Loaded potato soup is a classic for good reason…it’s absolutely delicious. But I’ve always felt that there was one thing missing in most recipes: the potato skins!

When I eat a baked potato, I look forward to eating the skin (my mom always said that that’s where all the vitamins are!). I love them, and I’ll usually eat anybody else’s if they’re willing to give them up.

So I decided that, instead of throwing away those potato peels, I was going to bake them to crisp them up (easy!) and put them on top of my soup.

Best idea ever (well, as far as this soup goes, anyway!). They crisp up beautifully in the oven and turn into little bits of deliciousness that take this soup to the next level!

Here’s a look at how to make Cheesy Potato Soup With Crispy Potato Skins:

Those potato skins are so good, they make for an excellent snack too. Make them any time you have to peel some potatoes (no waste!). Season them up however you like (ooh…possibilities!), and you have a tasty pre-dinner treat!

I hope you try this recipe for Cheesy Potato Soup With Crispy Potato Skins and love it as much as I do. Thanks for visiting today! 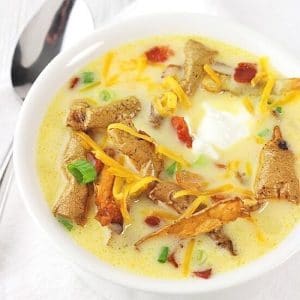 The Soup and Crispy Potato Skins: