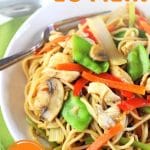 This Chicken and Veggie Lo Mein is a quick and easy homemade version of the popular Chinese takeout dish. It’s got lots of chicken and colorful veggies tossed with noodles and a flavorful sauce. I think it’s even better than takeout!

I LOVE Chinese food, and lo mein is one of my favorite dishes. I mean, come on, noodles and Chinese? Hell, yeah! I have to admit, though, that I’ve always been just a little bit disappointed in takeout lo mein because they always skimp on the meat and veggies.

My solution? Make it at home, of course! That way, I can put in it exactly what I want (LOTS of chicken and veggies) and leave out what I don’t want (damn, sometimes those noodles can be really oily). I can get my Chinese food fix, and it’s better for me!

Now, I’m going to tell you right off the bat that this is by no means an authentic Chinese recipe. It’s just my take on lo mein – made the way I like it. It’s better than any takeout lo mein I’ve ever had. Everyone I’ve ever made it for loves it. In fact, it’s a favorite of my nephew, who requested that I post the recipe (Hey, Brian!).

The part of this recipe that will take the longest is cutting up all the veggies. Like I said, there are lots of them. Practice those knife skills! Make sure you do all your chopping and slicing first. You want everything to be ready to go when you start cooking – because the cooking part goes really quick!

HERE’S A QUICK LOOK AT HOW TO MAKE CHICKEN AND VEGGIE LO MEIN:

This recipe makes a BIG batch of lo mein – enough for six servings – so you’ll need to use a big wok or a large pan or pot so you have enough room to toss everything together. I don’t have a wok, so I use a 12-inch chef’s pot that is kind of shaped like a wok and holds about 5 quarts. This recipe fills that pot about ¾ full.

You could cut the recipe in half, of course, but leftovers reheat really well, so you could have another lunch or dinner or two. And here’s a little secret…it’s also pretty darn good cold when you’re creeping around the kitchen looking for a midnight snack!

One of the great things about this recipe is that you can change it up and customize it. Don’t like mushrooms? Leave them out. Want to add some broccoli? Add it. Use shrimp, beef, or pork instead of chicken. You can even make this a great meatless meal by skipping the chicken and just using the veggies!

I hope you try this recipe for Chicken and Veggie Lo Mein and love it as much as I do. Thanks for visiting today!