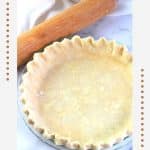 This Easy All-Butter Pie Crust bakes up flaky, golden brown, and absolutely delicious. And you can make it one of two ways: by hand or in the food processor!

Either way, it comes together very quickly (like 10-minutes-or-less quick). Then let it chill in the fridge for a bit, and it’ll be ready to roll…and you can use it with both sweet and savory fillings!

So…have you been intimidated by making homemade pie crust from scratch, or you’ve tried to make it but it never came out quite right?

For years, my answer to both of those questions would have been a resounding YES. I definitely bought my fair share of refrigerated pie crust dough.

BUT, my friends, this recipe changed all that for me…and it can for you too!

When I finally decided to conquer my pie crust fears, I really had only 2 requirements as I searched for the recipe:

Finding the right combination of ingredients – flour, salt, sugar (for sweet pies), butter, and water – was pretty simple. Just about every recipe I saw was almost exactly the same.

It was the method of turning those ingredients into the perfect pie crust dough that I needed to settle on.

As it turned out, two methods were so easy and gave me such excellent results every time that I couldn’t decide on just one, and so I’m going to show you both today. Try them and see which one you like best!

This one was my favorite (and to whoever came up with this genius idea…thank you)!

It skips the somewhat tedious step of cutting the butter into the flour with either a pastry blender, two knives or two forks. Instead, you simply toss the grated frozen butter with the flour mixture and then add ice water and mix until the dough starts to form.

So very quick and easy (and bonus: no extra stuff to wash)!

This one is also incredibly quick and easy (and the only reason it came in second for me is the extra step of having to clean the food processor afterwards…but it’s worth it, and I really like making it this way as well!).

Just put the flour mixture into the food processor, add cubed cold butter, pulse until the mixture resembles course crumbs with a few pea-sized pieces of butter throughout, and then add ice water and pulse until the dough starts to come together.

With either method, you then dump the dough out onto a clean work surface, gather it together and form a disk, wrap it in plastic wrap, and let it chill in the fridge for at least 2 hours (and up to overnight). Then it’s ready to use!

Note: Ingredient amounts are in the recipe card below.

Note: The above video is just a brief overview of the steps. Scroll down to the recipe card for the full printable recipe with detailed instructions.

The key to a flaky pie crust is very cold butter. Those little butter chunks in the dough will create pockets of steam while baking, giving you that wonderfully flaky crust.

You want to keep that butter as cold as you can. This means work quickly while making the dough and handle the dough as little as possible with your warm hands.

Chilling the dough before using not only keeps the dough and butter cold, it also gives the gluten strands in the flour a chance to relax (which will make it much easier to roll out) and it allows the moisture to distribute evenly throughout the dough.

I recommend prepping the filling before rolling and putting the pie crust in the dish. If you put the dough in the dish first, put the dish in the refrigerator while you make the filling so it stays cold.

Tips for Rolling Out the Dough:

How to Transfer the Dough to the Pie Dish:

You have a few options here. Whichever you choose, make sure the pie dish is close so you don’t have to go very far, and center the dough in the dish as best as you can.

How to Flute the Edges:

How to Blind-Bake the Crust (When Needed):

Some recipes call for blind-baking the crust (aka pre-baking or partially baking the crust without a filling). This is common with pies that don’t require a long enough baking time to fully cook the crust or pies where the filling isn’t cooked.

Up next is an awesome Dutch Apple Pie using this crust that’ll knock your socks off. Stay tuned!

I hope you try this Easy All-Butter Pie Crust recipe and love it as much as I do. Thanks for visiting today!

If you make this recipe, I’d love to know how it went! Please leave a star rating and comment below. Thanks! 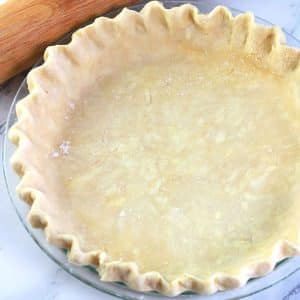 Finishing the Dough (for either method):