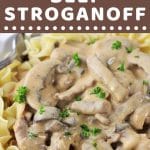 This Easy Beef Stroganoff is a classic dinner of tender sliced beef, mushrooms, and onions in a rich sour cream sauce served over egg noodles. It’s hearty and satisfying and ready in less than an hour!

When I’m in the mood for some serious comfort food, Beef Stroganoff is tops on my list. In fact, it’s one of my all-time favorite recipes, period! When you use the right cut of meat, it’s a quick and easy meal that’s perfect for a weeknight dinner or Sunday supper – and it’s even good enough to impress guests!

WHY IS IT CALLED STROGANOFF?

Beef Stroganoff is a Russian dish that, by some accounts, was created around 1891 by a French chef named Charles Briere who worked for the Stroganov family, a very wealthy and influential family during the time of Ivan the Terrible. It is said that the chef won a cooking contest with the dish and named it after his employer (although it’s also said that an earlier recipe appeared in the Russian cookbook A Gift to Young Housewives by Elena Molokhovets in 1861).

The original version was simply beef cooked in a mustard and sour cream sauce (no mushrooms, onions, garlic, alcohol, Worcestershire sauce, tomato paste or any other ingredients you might find today). The recipe has evolved throughout the years into many different variations across the globe.

I was introduced to the beefy, mushroomy, sour creamy deliciousness that is Beef Stroganoff as a kid by my Welsh grandmother who learned how to make it for my Russian grandfather (according to Gram, their Welsh+Russian marriage was quite the scandal back in the day – but that’s a story for another day!).

Sadly, I don’t have my gram’s recipe, but this recipe, which is adapted from Betty Crocker’s Cookbook, is my version, and the flavor is pretty much spot-on to how I remember her Stroganoff, which was so delicious – just like everything she ever made (miss you, Gram)!

USE THE RIGHT CUT OF MEAT (AND CUT THE MEAT RIGHT)!

Since this version of Beef Stroganoff is a quick-cooking dish, we need to use a cut of meat that will be nice and tender after cooking for a only short amount of time. That cut is boneless sirloin steak. It’s what I always use for the best results when making this dish.

A cut like top round steak could be used in a pinch, but the meat may not be quite as tender as the sirloin. You may need to simmer it a little longer for better results.

Whatever you do, don’t try to use a cut such as chuck which requires a waaaay longer cooking time (we’re talking hours) in order to become tender. Trust me. Just use the boneless sirloin steak. It might be a few dollars more, but the end result is totally worth it!

When you cut the boneless sirloin into strips, be sure to cut the meat across/against the grain – meaning slice perpendicular to the long muscle fibers (this is a good rule to always follow when cutting steak, either cooked or raw). Slicing it this way makes the meat less stringy and more tender. It definitely makes a difference!

HERE’S A QUICK LOOK AT HOW TO MAKE EASY BEEF STROGANOFF:

I love Beef Stroganoff served over egg noodles – there’s just something about that rich, creamy sauce and the egg noodles together that is absolutely divine – but you could also spoon it over some rice or mashed potatoes. YUM!

I hope you try this recipe for Easy Beef Stroganoff and love it as much as I do. Thanks for visiting today! 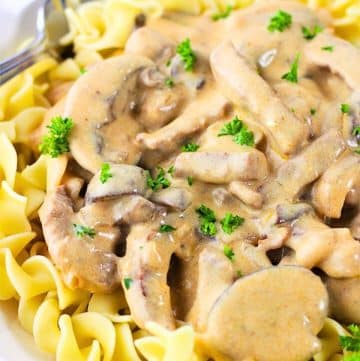