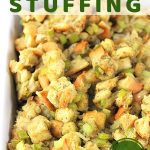 This homemade Easy Classic Bread Stuffing is a must-have side dish to go with your Thanksgiving turkey. It’s made with just a few simple ingredients and is sure to be gobbled up by your family and guests!

Thanksgiving is a little over a month away, so it’s time to start gearing up! Over the next few weeks, I’ll be sprinkling in some of my favorite Thanksgiving recipes to help you get ready. I’m starting off today with one of the essentials – the stuffing!

Next to mashed potatoes, stuffing is my favorite Thanksgiving side dish. I like to keep it simple and traditional – bread cubes, sauteed celery and onion, butter, herbs, and broth all mixed together and baked until it’s lightly brown and crispy on the top and moist in the middle.

Sure, I’ve tried making “fancier” stuffing over the years, adding things like nuts, apples, cranberries, mushrooms, and sausage or using a different bread like cornbread. They were good, but this is the stuffing that is my absolute favorite and the one that I always end up going back to. Sometimes simple is best!

WHAT’S THE DIFFERENCE BETWEEN STUFFING AND DRESSING?

Technically, I should be calling this stuffing dressing. Do you know the difference between stuffing and dressing? Stuffing is cooked inside the turkey, while dressing is cooked outside of the turkey in a separate pan. We’re cooking this one outside the bird, so – yep – it’s dressing.

Now, let me just say that I will be the first one to admit that I LOVE Stove Top stuffing, and I do use it occasionally (check out my recipe for Chicken Zucchini Casserole), but for Thanksgiving and special occasions (and sometimes not-so-special occasions), homemade stuffing is definitely the way to go. Besides, it’s really easy to make!

Most recipes will tell you to toast or stale the bread before making stuffing because the cubes will hold up better and won’t become mushy. Well, while that might be somewhat true, my mom never did it, my grandmas never did it, and so I don’t toast or stale my bread either – and I’ve never had mushy stuffing.

I just make sure to use a sturdy loaf of sliced white store-bought sandwich bread – something like Pepperidge Farm Farmhouse Hearty White Bread (#notsponsored). A soft, super freshly baked loaf of bakery or homemade bread is not what you want to use here.

I cut the bread into nice big pieces (about ½-inch big), and I don’t drown it in broth. The bread cubes hold up very nicely. The stuffing is nice and moist in the middle while golden brown and crisp on top. YUM!

If you don’t have any poultry seasoning, check your spice cabinet first before running out to buy some! You might already have the spices you need to make a batch of my Homemade Poultry Seasoning.

HERE’S A QUICK LOOK AT HOW TO MAKE EASY CLASSIC BREAD STUFFING:

This recipe makes about 6 cups of stuffing. At ½ cup per person, that would give you 12 servings. This recipe is easily doubled if you think you will need more.

Here’s some good news…This stuffing can be prepared the day before, so all you have to do on Thanksgiving day is bake it. How awesome is that?! One less thing to do on the big day!

When making it the day before, after you mix it together, cover and refrigerate. Just keep in mind that, since it will be cold, you will need to extend the cooking time (maybe an extra 15 to 20 minutes or so) to ensure the stuffing is heated all the way through. I usually take my stuffing out of the fridge and let it sit on the counter for about 30 minutes before baking to take a bit of the chill off.

I usually end up making way more stuffing than we actually need for Thanksgiving dinner. I always worry I won’t have enough, so I end up making extra (better to have more than enough that not enough is what I always say). I forget that, with all the other side dishes, everyone only takes a spoonful.

If you’re like me and end up with a lot of leftover stuffing but get tired of the same old leftovers, one way I love to use it in turkey soup. Yes, soup! I always make turkey soup with the turkey carcass, but instead of using noodles, I put a scoop of stuffing in each bowl. It’s sooo good! If you’ve never tried it, I definitely recommend it!

I hope you try this recipe for Easy Classic Bread Stuffing and love it as much as I do. Thanks for visiting today! 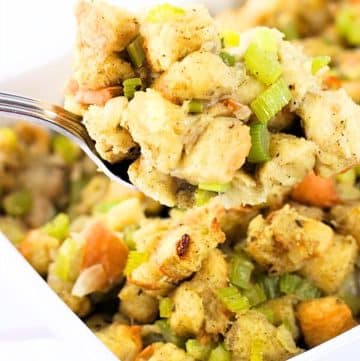 This homemade Easy Classic Bread Stuffing is a must-have side dish to go with your Thanksgiving turkey. It's made with just a few simple ingredients and is sure to be gobbled up by your family and guests!
Print Recipe Rate/Comment Pin Recipe
Prep Time: 10 minutes
Cook Time: 50 minutes
Total Time: 1 hour
Servings: 12 (1/2 cup servings)
Calories: 203
Author: Michelle / Now Cook This!