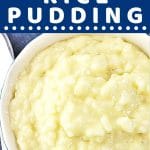 This Easy Instant Pot Rice Pudding is everything you want homemade rice pudding to be – thick, creamy, sweet, vanilla-y, comforting – and it’s super easy to make!

I’ve said it before, and I’ll say it again. Sometimes the simplest recipes are the best recipes. I love when a few basic ingredients turn into something absolutely delicious. This rice pudding is the perfect example!

My grandmother made the best rice pudding. Every few weeks, she would make a batch and bring some for us to enjoy (always packed in a Cool Whip or a big margarine container – lol – she recycled before recycling became a thing!).

Gram’s rice pudding recipe is a bit of a process, though, that involves a double boiler and over an hour of babysitting and stirring. Her efforts were well worth it, for sure. It’s still the best rice pudding I’ve ever eaten!

Me? I want something a little less time-consuming but just as yummy.

I’ve tried cooking rice pudding on the stove top, in the oven, in the slow cooker, and even in the microwave. Some were very good (and some not so much), but none of them were the keeper recipe that I was looking for.

Then I made rice pudding in my Instant Pot, and I’m happy to say that the search is finally over!

Here’s a look at how to make Easy Instant Pot Rice Pudding:

I like to top my rice pudding with whipped cream and sprinkle it with cinnamon and nutmeg. YUM!!! How do you like yours?

Gram, it’s not your rice pudding, but it’s pretty darn close. I’ll put it in a Cool Whip container and pretend, ‘kay? Miss you!

I hope you try this recipe for Easy Instant Pot Rice Pudding and love it as much as I do. Thanks for visiting today! 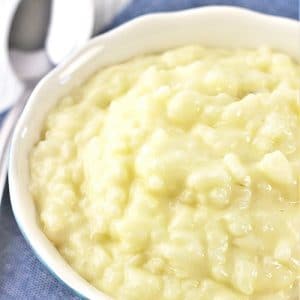