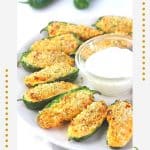 These Homemade Air Fryer Jalapeño Poppers are a quick and easy appetizer or snack that has all the flavor but none of the oil or extra calories since there’s no frying!

Do you love jalapeño poppers but have been a little intimidated to try making them from scratch at home? Don’t be! Using the air fryer makes it so fast and simple!

That’s right. In only about 20 minutes, you could be enjoying these little bites of deliciousness that are just as good – if not better – than any deep-fried jalapeño popper I’ve ever had!

And since they’re not fried, there’s no oil, no mess, and a lot less calories than traditional poppers.

This, my friends, is one of those recipes that have made the price of my air fryer worth every single penny (check out my air fryer recipes page for more).

We have sooo many jalapeños in our garden that I’ve been making these homemade jalapeño poppers a lot for the past few weeks, and I look forward to making and enjoying them again and again!

They’re perfect as a starter to any Mexican or Tex-Mex meal, as a party or game-day appetizer, or just as a yummy anytime snack!

Note: Ingredient amounts are in the recipe card below.

Note: The video above is just a brief overview of the steps. Scroll down to the recipe card for the full recipe with detailed instructions.

These babies are absolutely yummy as is, and they’re also fantastic served with some sour cream or ranch dressing for dipping. YUM!

I hope you try this Homemade Air Fryer Jalapeño Poppers recipe and love it as much as I do. Thanks for visiting today!

If you make this recipe, I’d love to know how it went! Please leave a star rating and comment below. Thanks! 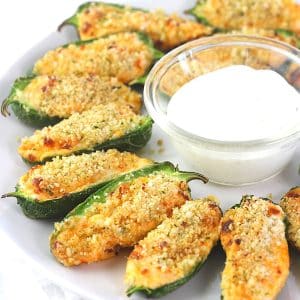 These Homemade Air Fryer Jalapeño Poppers are a quick and easy appetizer or snack that has all the flavor but none of the oil or extra calories since there's no frying!
Print Recipe Rate/Comment Pin Recipe
Prep Time: 10 minutes
Cook Time: 6 minutes
Total Time: 16 minutes
Servings: 16 poppers (approximately; amount will depend on the size of your jalapeños)
Calories: 49
Author: Michelle / Now Cook This!