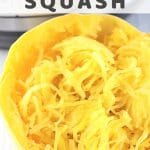 This recipe for Instant Pot Spaghetti Squash is the fastest (less than 30 minutes!), easiest way I know to cook spaghetti squash. If you love spaghetti squash, you’ve got to try cooking it in your pressure cooker!

Spaghetti squash is one of my favorite vegetables! It’s a great lower-calorie, lower-carb, and gluten-free alternative to pasta, and it can also be used as a vegetable side dish. It has a very mild flavor, so it takes on the flavor of whatever you put on it. It’s really versatile and can be used in many different ways!

I have 6 spaghetti squash plants in my garden right now, and I can’t wait for them to be ready! It’ll be a while yet, but I am going to have a TON (and some of them are huge)! Spaghetti squash are really easy to grow. If you haven’t yet tried growing them in your garden, I highly recommend it.

If you don’t have a garden, though, you can usually find spaghetti squash in the grocery store. Even though the season for spaghetti squash is generally fall through winter, these days, you can get it just about all year long, even in the summer.

Since spaghetti squash are a winter squash with hard skin (like butternut or acorn squash), if you store them in a cool, dry place, they can last for many months (my last batch lasted me over 6 months!).

I’ve been on the veggie noodle bandwagon for several years now. As I’ve gotten a little older, my waistline has gotten a little wider {sigh}, and it’s so much harder to lose the extra inches. Gone are the days when I could eat anything I wanted and never gained a pound, so I have to be a little more careful with my choices.

Now…let’s be totally honest with ourselves here. Nothing can really truly replace pasta. I mean it’s PASTA – and we all need to treat ourselves now and then. BUT when you feel like having a lighter, healthier alternative, you definitely have some delicious choices!

Zucchini and spaghetti squash are my go-to veggies when it comes to replacing pasta. Until I got my Instant Pot, I definitely used zucchini noodles more often because they’re so quick and easy to cook. Roasting spaghetti squash in the oven, on the other hand, took nearly an hour.

In the Instant Pot, however, cooking spaghetti squash takes less than 30 minutes! Woo-hoo!

By the way, if you’ve never tried spaghetti squash or think you might not like it, trust me, just give it a try. I think you will be pleasantly surprised! The first time I made spaghetti squash for David, he turned his nose up at it, but he ate it anyway and LOVED it (hence the 6 plants currently in my garden!).

HERE’S A QUICK LOOK AT HOW TO COOK INSTANT POT SPAGHETTI SQUASH:

What will you do with your spaghetti squash? You can go super simple and toss it with some butter, salt, pepper, and Parmesan cheese for a delicious side dish. You can top it with sauce or you can make spaghetti squash boats, lasagna, casseroles…sooo many possibilities!

And oh, yes…I have some spaghetti squash recipes coming your way very soon, so stick around! In the meantime, try it with my Quick and Easy Homemade Spaghetti Sauce and Easy Baked Meatballs.

I hope you try this recipe for Instant Pot Spaghetti Squash and love it as much as I do. Thanks for visiting today!