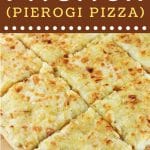 Pagach – aka Pierogi Pizza – is pizza crust topped with cheesy mashed potatoes and buttery sautéed onions and then baked until it’s golden brown and delicious. How could that not be good?

Up here in Northeast Pennsylvania, Pagach (or pagash as it’s sometimes spelled) is very popular. It’s a dish of Slavic origin (Polish in my case). You’ll find it in most local pizza shops, and many of our moms and grandmas often made it at home.

If you’ve never heard of it or tried it, you are in for a real treat!

And I do mean treat! Pagach (we pronounce it paw-gotch; some say puh-gosh) is some serious carb-a-licious, cheesy comfort food. It’s totally addictive, and you will definitely want to eat more than one piece.

I think it’s worth every single calorie!

Everyone seems to have their own way of making it!

The recipe that I’m sharing with you today is the way my mom and dad always made it (and the best way as far as I’m concerned) – just a bottom crust with a cheesy potato and sautéed onion topping that’s baked, and then you spread on more buttery onions and cheese and broil it until golden brown.

My mom was the cook in our house, but this is one of a few recipes where my dad would actually get in the kitchen with her, and they would cook it together while my sister, brother and I watched and waited with anticipation.

We couldn’t wait to eat it (I sure do miss those days)!

In their earlier days of making pagach, mom and dad used thawed frozen bread dough as the crust, which was very good.

Later on, they started using a store-bought pre-baked Sicilian-style pizza crust, which not only made it better because the crust was much more sturdy and crisp, it also made it a much easier recipe since there was no dough to fuss with!

Note: Pre-baked pizza crusts are usually found in the refrigerated/dairy section of the supermarket near the mozzarella cheese.

HERE’S A QUICK LOOK AT HOW TO MAKE PAGACH (PIEROGI PIZZA):

Pagach is delicious eaten fresh and hot from the oven, of course, but let me just say that it is also very good at room temperature, and it’s even really good cold.

Yes, cold! Since I was a kid, I have always enjoyed eating a leftover piece straight from the refrigerator as a snack. Just try it!

I hope you try this recipe for Pagach (Pierogi Pizza) a try and love it as much as I do. Thanks for visiting today! 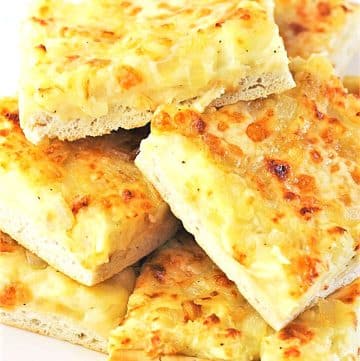