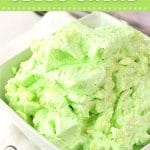 This easy Pear and Lime Jello Salad is a retro classic that can be served as either a dessert or a side dish at the holidays or any time of the year!

It’s sweet, creamy, light and fluffy, refreshing, delicious, and just as good at a summer barbecue as it is with Christmas dinner!

Back in the day when Jell-O salads and molds were all the rage, this one was often called Seafoam Salad (I assume because of it’s lovely seafoam green color and fluffy texture). And it’s a holiday dinner tradition in our family!

We call it The Green Jell-O Salad (because there’s a red one too), and there are very strong opinions about it. Some of us love it {raises hand and waves it enthusiastically}. And others…well, not so much.

I don’t get that (it’s sooo good!), but it’s totally fine because, you know, more for those of us who enjoy it!

Last year, I shared David’s grandma’s recipe for Cherry Applesauce Jello Salad (that’s the red one), and it’s become such a popular recipe here on the blog that I decided to share this one as well (I guess lots of people still like Jell-O salad!).

It’s so easy, all you need is 4 ingredients, and it takes only about 15 minutes to put it all together. Then you just let it chill out in the refrigerator until it’s set…so it’s perfect for making ahead.

Now, I will admit that I took a couple of liberties with Grandma’s recipe to make it just a little quicker and easier (both out of sheer laziness, if I’m going to be totally honest). I shortened up the steps, and I swapped out the Dream Whip for Cool Whip.

Both changes worked out just fine, and the salad came out exactly the same. You’ve got to try it!

Here’s a look at how to make Pear and Lime Jello Salad:

Note: This is just a quick overview of the steps. Scroll down to the recipe card for the full recipe with detailed instructions.

You can top each serving with a dollop of whipped cream if you’d like. And wouldn’t a red maraschino cherry on top make this so festive and perfect when serving it for the holidays?

I hope you try this Pear and Lime Jello Salad recipe and love it as much as I do. Thanks for visiting today!

This easy Pear and Lime Jello Salad is a retro classic that can be served as either a dessert or a side dish at the holidays or any time of the year!
5 from 3 votes
Print Recipe Rate/Comment Pin Recipe
Prep Time: 10 minutes
Cook Time: 3 minutes
Chill Time: 4 hours
Total Time: 4 hours 13 minutes
Servings: 12 (about ½ cup each)
Calories: 185
Author: Michelle / Now Cook This!