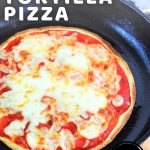 Skillet Tortilla Pizza is THE BEST personal-sized, super-thin-crust pizza! It’s so quick and easy to make when you want pizza, and you want it NOW. Using a cast-iron skillet makes it nice and crispy!

I’ve said it before, and I’ll say it again…I LOVE pizza and could eat it every day! When I’m in the mood for pizza but don’t want to go through the fuss of making dough or even getting takeout pizza, tortilla pizza is my go-to. It’s so delicious, and it satisfies my pizza cravings in a hurry (seriously – like in 10 minutes)!

I’ve been making tortilla pizzas for a long, long time (when you’re a broke kid in college, they’re awesome!). When I first started making them, I just put the tortilla on a baking sheet, topped it, and baked it. It was really good, but the crust was never quite as crispy as I wanted it to be.

The answer for a crispy tortilla? A cast iron skillet! First, you crisp up the tortilla in the skillet. Then you add the toppings. Then you put the skillet under the broiler just until the cheese melts. It works like a charm!

HERE’S A QUICK LOOK AT HOW TO MAKE SKILLET TORTILLA PIZZA:

In addition to using a cast-iron skillet, another secret to a crispy pizza is to make sure you don’t overdo it with the toppings! For a 9-inch-ish tortilla, I only use 3 tablespoons of sauce and ½ cup of cheese. It’s really all you need for a delicious pizza!

I usually use a plain flour tortilla for my pizza, but you could use whole wheat or any other flavor you want. You could also use a bigger tortilla (or even a smaller, taco-sized one – the perfect kid size). Just adjust the amount of sauce and cheese accordingly.

When you’re feeding more than one person, of course, you’re going to have to go through the process again for as many pizzas as you want to make. If you have two cast-iron skillets, you could get a second one going while the first one is under the broiler.

Only have one skillet? Just share the first pizza while the next one is cooking – which is what we usually do because, even though I have another skillet, we only want to have to clean one, so I just keep cranking out the pizzas one at a time until we’re full!

One tortilla pizza is the perfect size for one person. It’s the ultimate quick and easy personal pizza AND everybody can top their own pizza exactly the way they want it!

The next time you have a pizza craving, give tortilla pizza a try. I always keep everything I need on hand so I can make one of these babies whenever I want!

I hope you enjoy this recipe for Skillet Tortilla Pizza and love it as much as I do! Thanks for visiting today!